Our foundation in the news 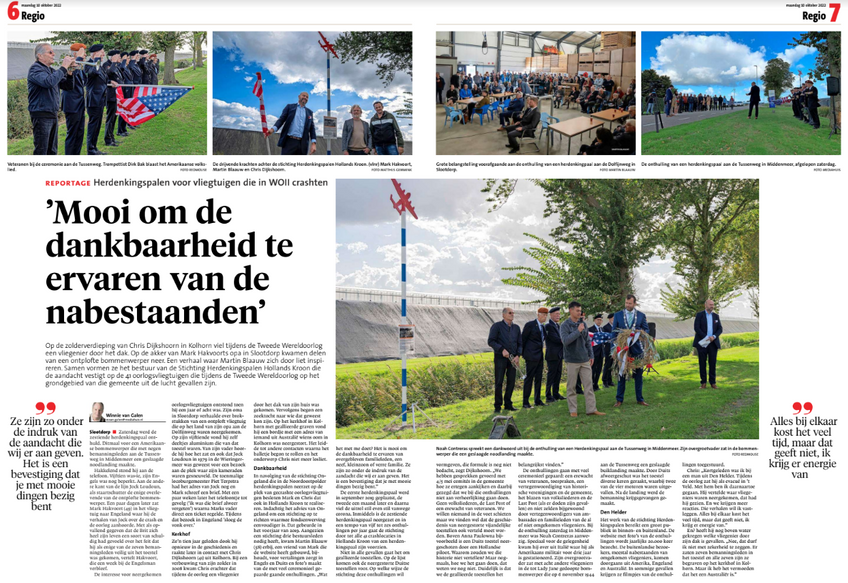 In the run-up to the unveiling of the 16th, and the last one before 2022, remembrance post, the board members of Stichting Herdenkingspalen Hollands Kroon were interviewed by Winnie van Galen of the Noordhollands Dagblad.

The result was a beautiful and extensive article in the regional section of the NHD on October 10, 2022

Only available in Dutch

Presentation of our Foundation at the local veteran's day.

September 24 was the annual local veterans day, organized by the Municipality of Schagen and the committee Veterans Schagen. Our foundation was invited to tell us about our activities here. In village hall Ahoj in Tuitjenhorn, about 50 visitors watched and listened to the presentation that Chris Dijkshoorn gave. 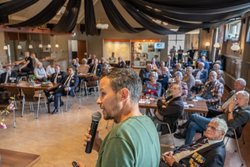 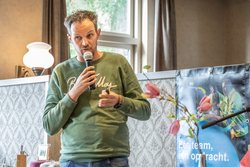 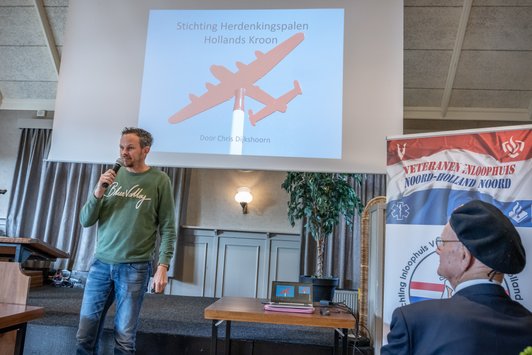 James Stewart was a flight engineer on the Halifax JN884 which crashed at the Dolfijnweg near Slootdorp on 26 July 1943. On April 16, 2022, we unveiled a remembrance post for the crew of this aircraft. The family of Jock Ernst Loudoun, gunner aboard this aircraft, was present at this unveiling.

On July 9, 2022, Mark Hakvoort, our chairman, received family members of James Stewart. Alan (son of James' sister) and Sue Riddel were in the Netherlands and visited the remembrance post at the Dolfijnweg. In addition, they laid flowers at Stewart's grave in the cemetery in Middenmeer. It was an emotional and beautiful experience according to Alan and Sue. 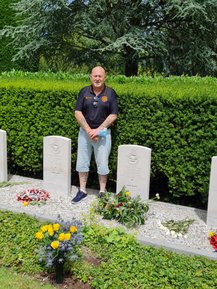 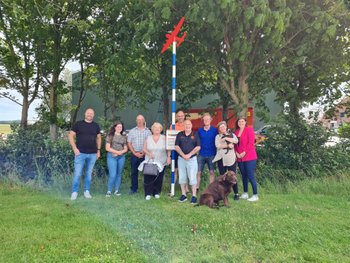 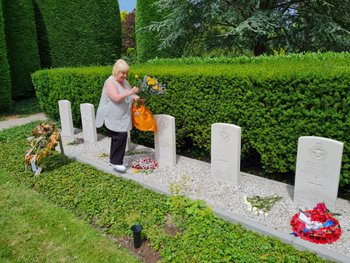 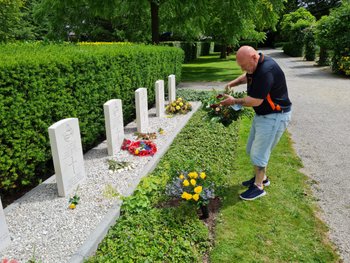 Wreath and memorial for Raymond Kennedy at the cemetery in Middenmeer

On Sunday 26 June 2022, the national monument "Missing Airmen" was unveiled in the IJsselmeer near Molkwerum. This memorial commemorates the many airmen who died in the Second World War and went missing. They have paid the highest price for our freedom. The unveiling of this moment received a lot of attention from, among others, the national press.

For this occasion, relatives of killed crew members of the crashed Stirling EH889 had also come over. One of the crew members of this aircraft, Sergeant Raymond Kennedy, is buried in the cemetery in Middenmeer. The day before the unveiling of the national monument, the Molkwar 2000 Foundation organized a tour along important locations such as the remembrance post for the Stirling in Medemblik, the place where the occupying forces blew up the dike, which flooded the Wieringermeerpolder and thus also the cemetery in Middenmeer. Our foundation, Stichting Herdenkingspalen Hollands Kroon, took care of the reception of the approximately 30 guests.

Fekke Bandstra of the foundation "Stichting Molkwar 2000" commemorated Raymond Kennedy in a speech after which a wreath was laid at his grave, the English national anthem was played and a minute of silence was observed. Martin Blaauw of SHHK told the relatives and other guests about how our foundation keeps the memories of killed and missing crew members alive with remembrance posts. 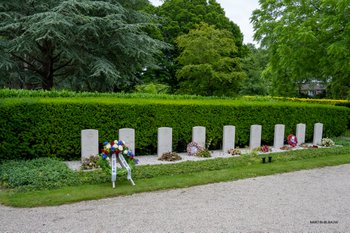 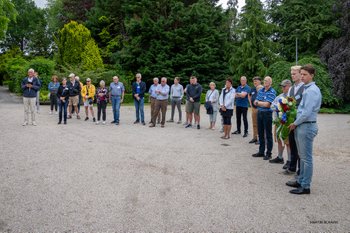 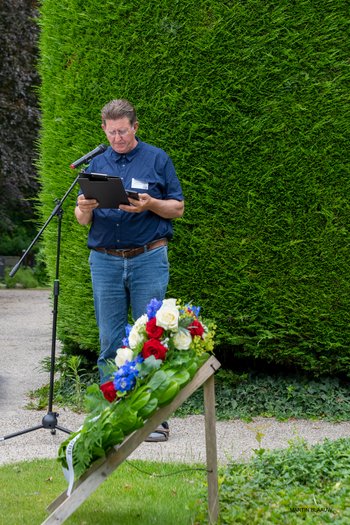 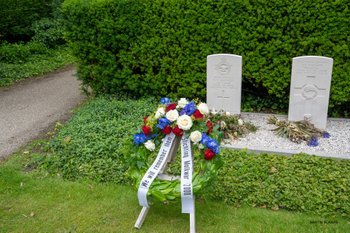 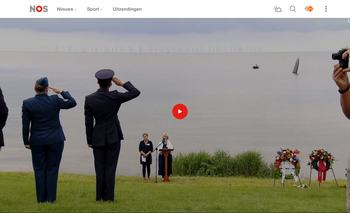 The NOS reported extensively on the unveiling of the national monument. Click on the image to view this report. 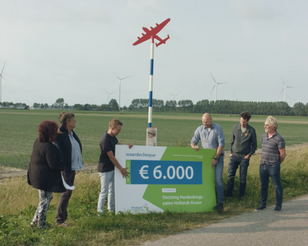 We are very proud that just recently we have received the generous contribution of €6000-, out of the Wind Fund Wieringermeer. On June 3, 2020 the board of the foundation Windloket handed over the cheque to the board members of our foundation. Everything is recorded in this short film clip.

All this was reason for the Noordhollands Dagblad to have an interview with Chris and place an article on June 15th newspaper. 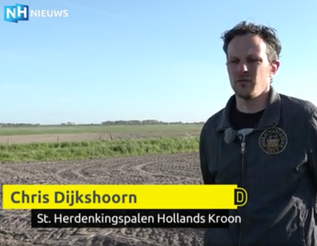 Chris and Mark in NH-news about the monuments tour.

NH published an interesting article, including a short clip, about the new monuments tour. Chris Dijkhoorn and Mark Hakvoort talk about the importance of remembering the pilots and crew members who have fought for our freedom. 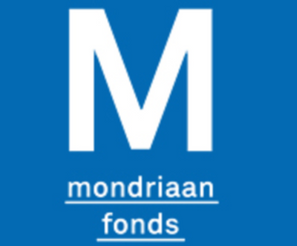 Recently, the board of this foundation has applied for a contribution out of the Mondrian fund. The public stimulation fund for visual arts and cultural heritage. We are very proud to inform you that the board of the Mondriaan fund has approved our application positively and has assigned funding to us, which will enable us to reach our goals; the placing of remembrance posts, collecting and sharing of the stories behind the crashes and remembering their crew members. 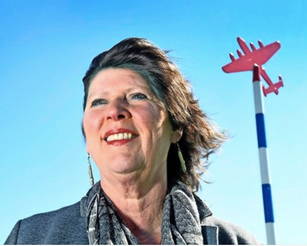 No unveiling but in the news

The Noordhollands Dagblad has published an article in which it focuses on 75-year liberation and to all the preparation taken for a big celebration. On 5 May, due to the Covid-19 virus, there are not 10 remembrance posts as planned. In the article mayor Rian van Dam poses in front of one of our two posts, placed last year 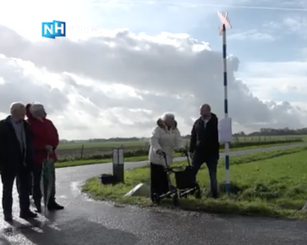 On 25 October 2019, the remembrance post for Ivan R Moon was placed and unveiled at Vatrop. The ceremony took place at the junction of the Vatropperroad and the Gemenelanserooad. NH-news report was present to cover this story. 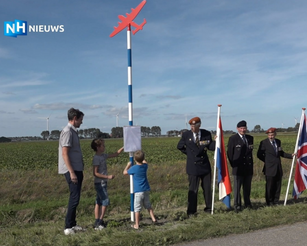 The official unveiling of our first remembrance post is a fact.

On 14 September 2019, t the exact same spot where the crew of an English Whitley bomber died in 1941, the first remembrance post was placed. Eventually there will around 40 posts which will keep the stories of the deceased men alive. NH news reported extensively on this event.

The establishment of SHHK in the media

On 18 April 2019 NH news reported on the establishment of Foundation Remembrance posts Hollands Kroon. Click here for a representation.

De establishment of SHHK in the media

On 17 April 2019 Medemblik Actueel publishes an interview with Mark and Chris on their YouTube-channel. The interview is about the establishment of the foundation.